After months of planning, preparing, and mostly waiting we made it to Venezuela… This blog post will be a bit different than most to this point:  I’ll let the photos do most of the talking.  The full story and my reflections on the experience are taking me a while to process and write up… stay tuned for the rest of the story, perhaps via a different outlet.

It all began back in Flagstaff…..

Big-wall training in the bouldering Gym

We met up to train and talk logistics…and ended up in the bouldering gym!

When December finally rolled around, Eric, Blake and I flew to Caracas to meet Luis and his family.  We arrived on Christmas Day and were treated to a Venezuelan Christmas dinner! 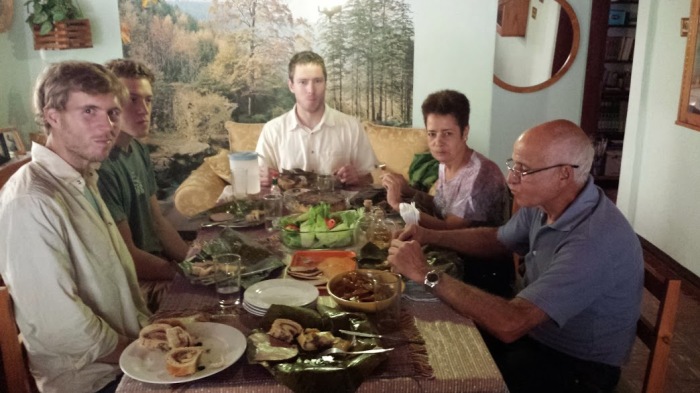 Christmas Dinner with the Cisneros Family

The home-cooked food and comfort didnt last long, as we piled onto our first bus the next day.

This bus made it nearly 5 miles out of Caracas before breaking down!  We spent several tense hours on the side of the highway until repairs were complete and we finished the voyage to Cuidad Bolivar

We got pretty good at sitting around and waiting… like here, waiting for our connection to Santa Elena in Ciudad Bolivar!

A long awaited rest after days on the bus

After a Mach-6 bus voyage to Santa Elena, we arrived at midnight and needed a place to sleep and we found one….. in the front lawn of the city police!

After an exciting Cessna flight from Santa Elena to the village of Yunek, we were within sight of the Tepui!  Never mind that Amuri Tepui, our objective,  was 3 days away, which turned out to be a bit farther than our guide and porters wanted to hike over the holidays.  They were excited for the village New Years Eve festivities, so we shifted our objectives to the much closer Acopan Tepui.

The savannah approach to Acopan Tepui

River Crossing on the approach to Acopan

We crossed rivers and hacked through jungle on our way to the route.

On the approach to Acopan

On the approach to Acopan

We spent the first night in the established climber’s base camp, a gorgeous clearing in the jungle next to a bubbling clear creek.  The next morning we set off with the guide and porters to complete the hike to the base of our intended route. 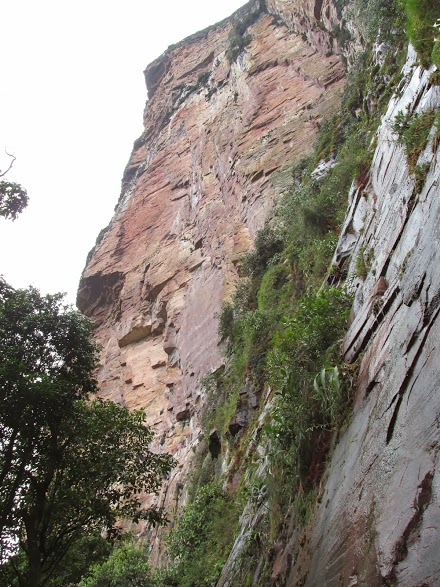 The Central Red Pillar of the North Face of Acopan, as seen from our camp

Our objective was this beautiful red face on an unclimbed pillar on the North Face of Acopan.  After a few false starts, we got a pitch off the ground.  Pitch one turned out to be a rather enjoyable 5.10+ with only 10 meters of jungle climbing at the start.

Pitch one of Gravity Inversion

Pitch two was an exciting, traversing 5.11d that introduced us to the gorgeous textured rock on the tepui…the good stuff that we came for. 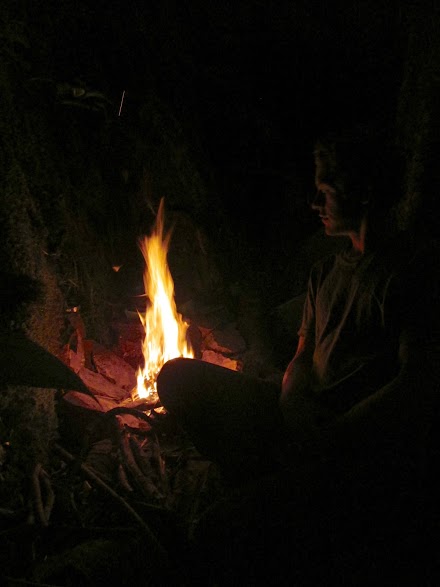 It turns out that whisperlite stoves don’t work well with Venezuelan diesel fuel… so we made fires… lots of fires.  Our camp was situated a 5 minute walk from the base of the route in the only flat-ish place we could find.  It still took 3 hours of creative construction to level platforms from dirt, rock, branches and palm fronds.

Our camp at the base of the route on Acopan

After a few days of climbing incredible rock and fixing our lines to a nice set of footledges at the top of pitch 6, we left the ground for good, not to return until the route was finished.  This proved to be a big day of jugging and hauling. 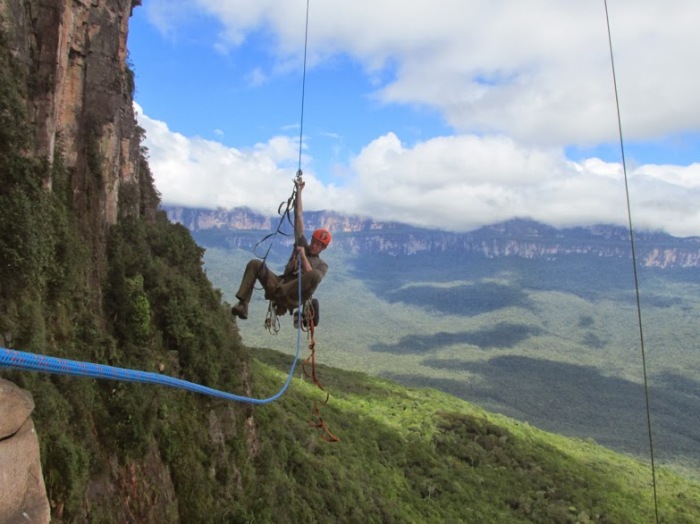 Camp one was situated at the top of pitch 6, above the prominent Roof Jr.( P5, pictured above), which turned out to be the crux of the route at 5.12d.

While our stoves weren’t working, we still wanted hot food.  So Eric packed a haulbag of firewood and we had ledge campfires!

Through it all, Luis made the trip possible.  He sweet-talked every bus agent, military policeman, airline employee, and hotel clerk between Caracas and Santa Elena.  His big-wall experience proved invaluable in coordinating our somewhat complicated hauling logistics. 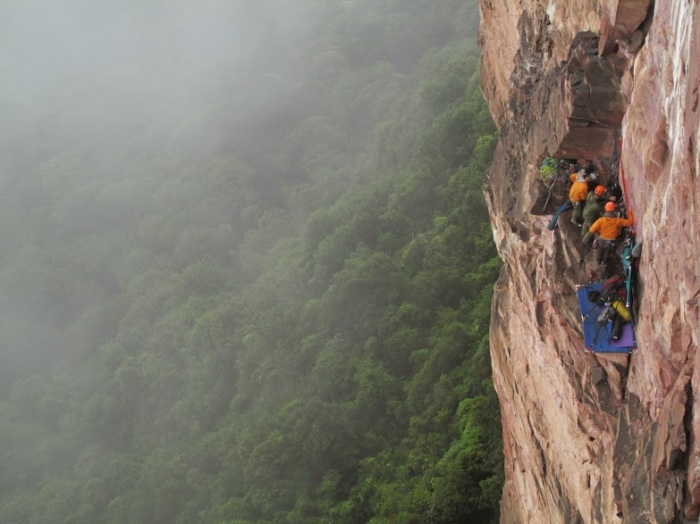 Camp One from Above

From Camp One, we rapped down so I could free Roof Jr., the pitch Eric dubbed “the pitch of your life”.  It truly was incredible, overhanging 25 feet through a series of stacked roofs split by a tips and finger crack.

Above Roof Jr, we got in to wildly sculpted red quartzite huecos, fins, and jugs.  We dubbed this ‘Fun Rock’.

The Fun Rock of Pitch Six

Above Camp One, we pressed on through five high quality 5.11+ and 5.12 pitches to reach a jungle ledge where we established Camp Two. 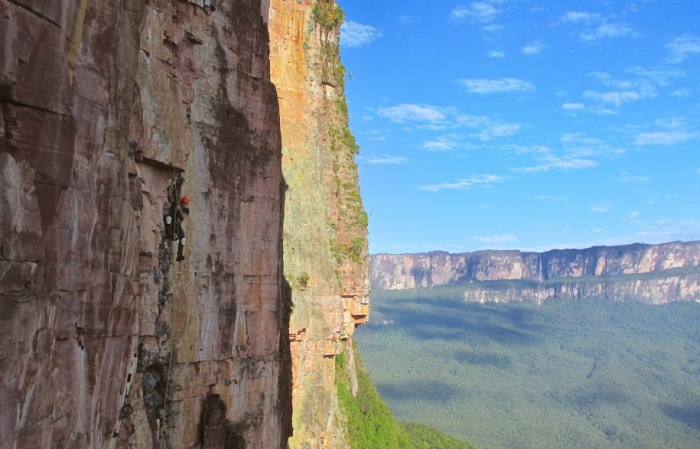 Jumaring… there’s no better way to wake up in the morning.

Our view from Gravity Inversion, another massive Tepui face

The whole time on the wall, we had incredible views of waterfalls and beautiful walls across the valley.

We built Camp two on a small jungle ledge and spent 6 days there. 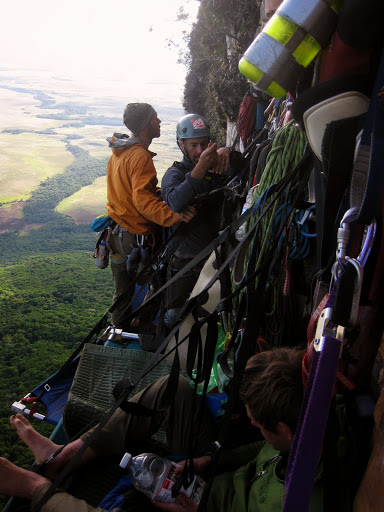 One of the cruxes of the route proved to be reaching the top from Camp two.  The first three pitches above Camp two went well, but above that, the rock became wet and loose in places.

We traversed right to  a steep section of jungle.  This avoided wet, rotten rock without protection, but fed us in to serious vertical jungle.

Joel Unema and Eric Deschamps near the top of Gravity Inversion

Pitch 16 was protected by one cam 10 feet off the belay, and slung finger-to-thumb-sized branches for the rest of the pitch.  It was overhung jungle wrassling, and we dubbed it ‘Green Hell’

After passing through the heart of darkness on Green Hell, Pitch 17 seemed almost tame by comparison.  Runout squeeze chimneying led to a section that required considerable creativity and Tepui climbing methods.

I ended up wedging myself between the wall and a 300lb mat of agave-like plants.  Once I succeeded in securing myself between, I realized that I could not move.  Or breathe.  I pulled up the machete and chopped through the root giving life and support to the bio-monster.  Above that, some casual (NOT) offwidthing led to a belay. 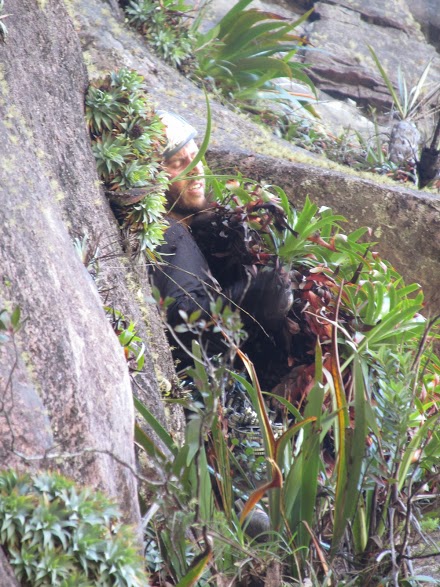 After facing the fires of Green Hell, and chopping the jugular root of the bio-monster, we were rewarded with a five-star crack climbing pitch.  A thin flake with a wide-hands crack led to a perfect thin hands layback, which led to a tips boulder problem in a smooth dihedral, all on perfect textured rock.  Climbing this incredible pitch at the top of our route was an unbelievable treat.

Joel Unema on the final glorious pitch of Gravity Inversion

Even following and jugging the jungle pitches was rather unpleasant at times, as Blake’s face might reveal.

Blake McCord gets used to the idea of Jungle Jammin’

As we neared the summit of the tepui, a unique and beautiful assortment of endemic plants greeted us. 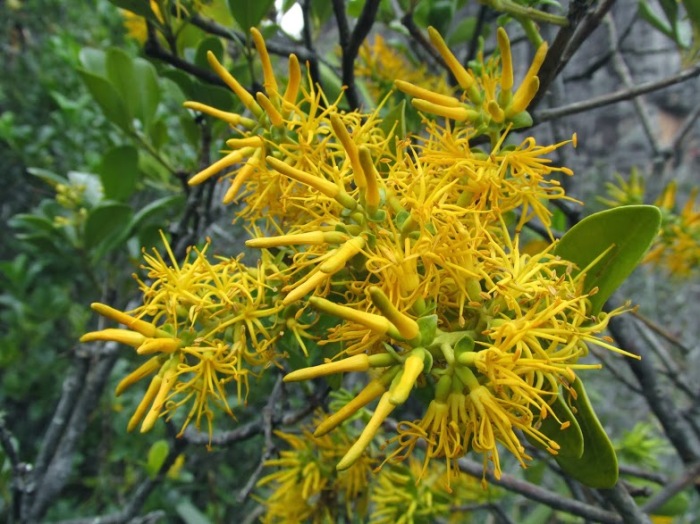 The view from the top of Gravity Inversion on Acopan Tepui

Wind-sclupted warriors, stone forts and turrets, and sparse vegetation populated the top of Acopan Tepui, and we spent several hours playing in this wonderland. 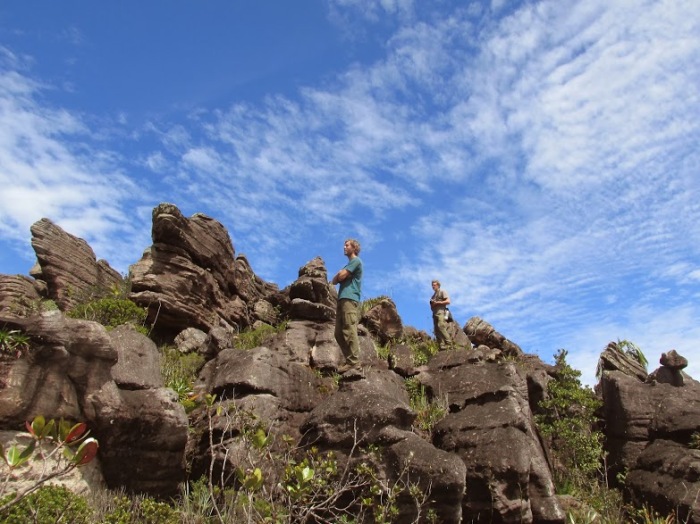 The fabled and incredible rock formations on top of Acopan Tepui 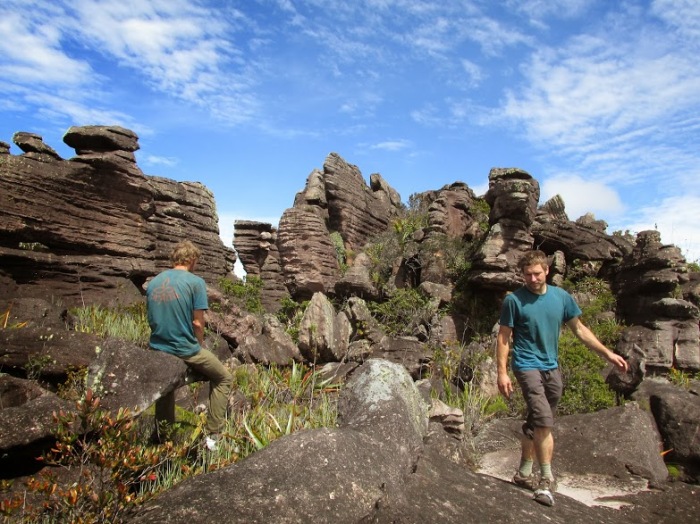 Joel and Eric clown around on top of Acopan Tepui

After a week on the wall and a big summit day, we were beat as we sat down for dinner back at camp. 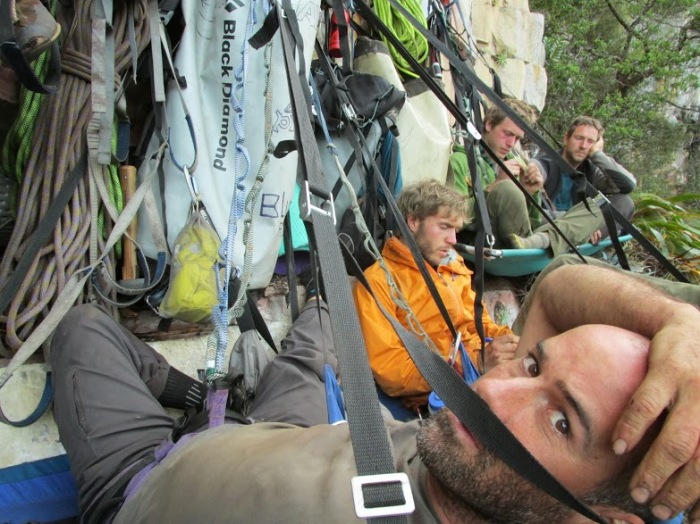 The team, tired but exhilarated after summiting Acopan Tepui

The next day we rappelled the 11 pitches below Camp two, and reached the ground safely!

Touchdown! The team is back on the ground.

Arriving back at base camp was incredible, as we bathed in the creek and enjoyed some time relaxing on flat ground.

Big Smiles back at base camp

After 11 days climbing and eight days on the wall, I’m hooked.  The free climbing is some of the best I’ve ever experienced.  Perfect rock, good gear, pitch after pitch of sustained steep and difficult climbing; I’ll be back for more.   I rappelled off the wall in sadness; I wanted to stay on the wall and keep climbing.  This expedition taught me much and changed me even more.  I will do whatever it takes to continue filling my life with trips like this: expeditions to new and wild places with the people I love, and more specifically; big-wall free climbing and first ascents.  The adventure, challenge, and commitment level this climb provided are a strong dose of the medicine I need, and I’ll be back for more… in the Tepuis and elsewhere.

Dreaming of the next climb on Acopan

Sharing this experience with Luis, Blake, and Eric was incredible.  We worked together and made sacrifices individually for the success of the team.  We grew close through our shared joys and hard times on the wall, and I count them among my best and most trusted friends.  Together, we established Gravity Inversion VI 5.12d (5.12bR).    Our climb is sustained, with 6 pitches of 5.12, 9 of 5.11, and 3 of 5.10, and consistently committing, requiring hard climbing with spaced-out gear. 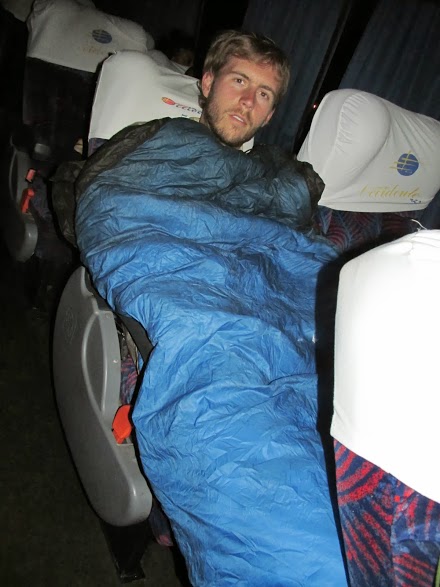 Cozied up on the Polar Express

Thanks  to Eric and Luis for these photos.  Blake has cards and cards full of high-quality photos, and those will be published soon along with the rest of the story.

Thanks so much to Mad Rock Climbing and Prana for supporting this expedition.

The American Alpine Club awarded us the Live your Dream Grant, which helped a ton.  Thanks AAC!