As the wave of orange and yellow rolls from the peaks aspen groves to the canyon maples in Oak Creek, crisp conditions and warm fall feelings follow close in the wake. Cool fall breezes, morning frost, and the sound of elk bugling mark the start of autumn and the return of prime climbing conditions.

Mat Greco and Dave Bloom work on the FA of Skull Fracture 5.13c

As climbers eagerly await the change of seasons, it often feels like fall will never arrive, but when it does, the transition seems to occur overnight. As temperatures and humidity begin to fall, so do projects opened over the summer. Impossible slopers become velco-like, microscopic crimps seem to double in size, and rock shoes transform from deformable goo to precision scalpel-like instruments.

The arrival of fall in Flagstaff has brought the completion of new and difficult climbs at a number of areas. Dave Bloom and Mat Greco added the quintessential Winslow Wall crimping testpiece to the James Brown wall with Skull Fracture 5.13c. This incredible and unique line follows micro-crimps up white edges along a fault plane in the Coconino Sandstone. Bring steel tendons, thick skin, and tenacity for this fierce line.

Earlier in the summer, John Crawley and John Gould opened a new sport climbing area in James Canyon on gorgeous sandstone reminiscent of the Red River Gorge. Steep routes on great rock in a pristine and quiet setting offer a respite from summer heat, but it took the arrival of fall for the two hardest lines to fall. Crawley and Dave Bloom bolted Big Green 5.12d earlier in the summer, and Dave managed to finish it off in September. Mat Greco bolted and attempted another gorgeous line on the other side of the canyon in the heat of the summer, but again, the arrival of fall brought the send, and I managed the FA of Uncle Kentucky 5.13a.

Mat Greco on an early attempt of Uncle Kentucky 5.13a

Development continues at several areas and new lines are harvested in the autumn rush, but my focus has honed in on the Waterfall. As my time in Flagstaff grows shorter and thoughts turn back east in anticipation of a fall road trip, projects at the Waterfall have become my priority. I’ve had the opportunity to put in many days cleaning, projecting, and sending with John Crawley, Dave Bloom, and Carrie Albrecht.

We have established eight new lines in the past couple of weeks. John and I put up Logic Bomb 5.12, a demanding and technical mixed line up the main amphitheater. Dave did the FA of Sphere of Influence 5.12-, a gear-protected gem up an incredible left-facing dihedral, also in the main amphitheater. He and I also cleaned up and climbed Butternuts 5.11, a striking white dihedral with engaging climbing and ample passive protection.

I extended Dihedral of Dagmar 5.11 (D. Singer, D. Miller 1992), adding 35 feet of engaging crack and face climbing and a modern anchor to this already-incredible finger crack. Another new variation is Black and Tan’s evil twin Dark and Stormy 5.11, which exits left out two burly roofs where Black and Tan exits right.

The proud hall containing The Trident 5.13a

The highlights of my past few weeks at the Waterfall have been the establishment of three new testpieces which demanded from me physical fitness, mental fortitude, and serious trust in thin gear and the strength of basalt. Consensual Hex 5.12 exits the roof left of Dr. Octagon, and may be the burliest roof climb to date at the Waterfall.

After years of many climbers gazing longingly at the thin and blank seams of The Trident 5.13a, I thoroughly inspected and cleaned the line, believing that it must be possible. JJ Schlick had suggested it and a few other systems to me to inspect for difficult climbs. Not only was it possible, it proved to be incredible movement on a stunning feature that went a grade much more moderate than anyone anticipated, and on all gear!

The culmination of my personal autumn rush was the FA of Thin Faith 5.13 (c?), a gear-protected steep and alluring climb tucked between Double Helix and Super Chron on the Double Clutching Wall. The bullet hard basalt provided just enough features to allow this line, producing multiple cruxes of delicate crack moves and powerful bouldering in committing positions. 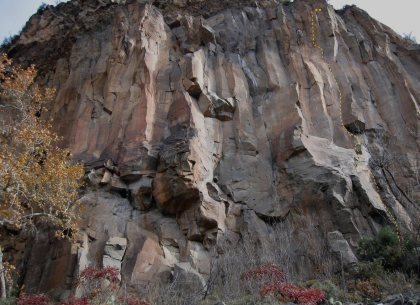 The orange line marks the path of Thin Faith 5.13c

More than the hard climbing, the first ascents, the crisp feeling of sticky sandstone on a cold day, or the rustle of drying leaves in the cool breeze, I have savored the company of my good friends and partners. Without John, John, Dave, Mat, and Carrie, none of these climbs would have happened, and without them the climbs wouldn’t matter much anyway. Demanding climbs and unlikely first ascents are not the end goal, rather memorable markers of a life spent pursuing beauty in nature and motion on stone with those we love. 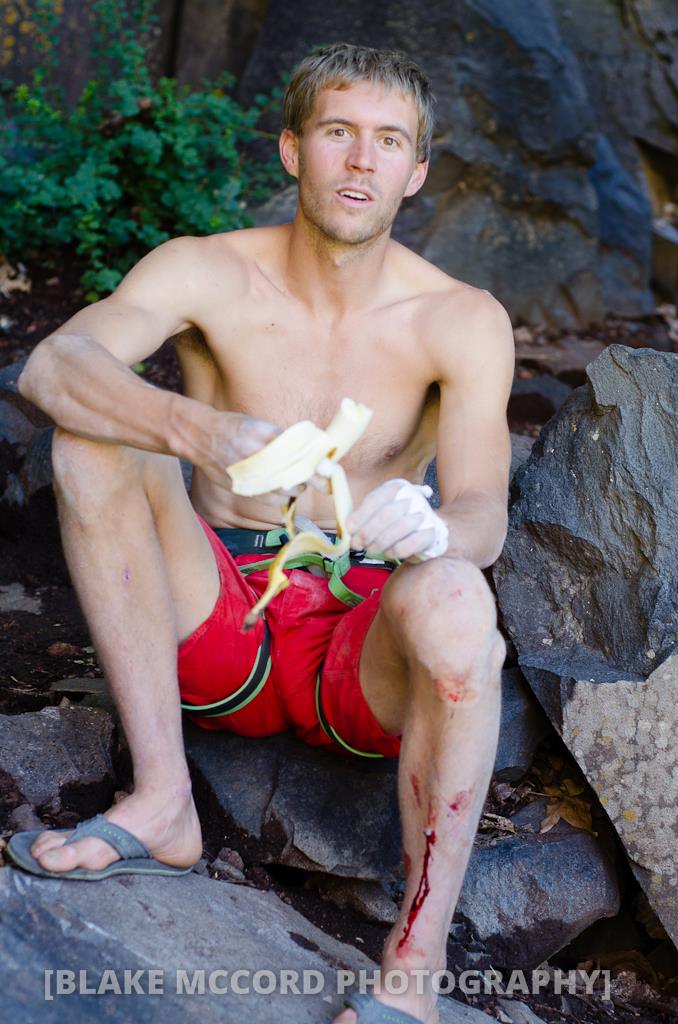 Bloody and battered and beaming after battling for the FA of Consensual Hex 5.12.

I’m so thankful for great partners like John, John, Dave, Matt, Carrie, and Blake; mentors and encouragers like JJ and Wade; and all of my other great friends. Check out Blake McCord Photography for more great photos!

One thought on “Winds of Change”